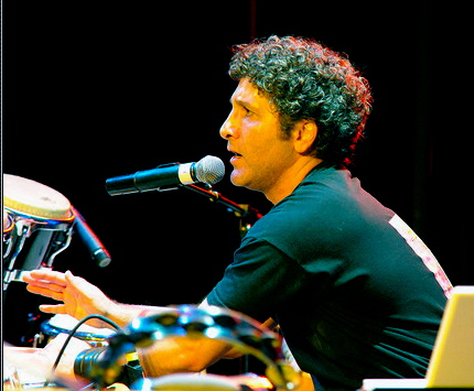 All these music shows were presented at several music clubs and theatres around Buenos Aires.

Also with ‘Raices del Flamenco’, a performing art show, featuring music, dance and acting. It’s related to Flamenco fusion music, along with Flamenco dance, Poetry and Acting as well.
This show has been presented in Buenos Aires, during October and December 2008.

Series of concerts with Singer – Songwriter Barbara Luna at ‘La Vaca Profana’, a well-known music club in the Buenos Aires scene. Barbara is an accomplished musician, who is currently living in Paris - France, and works in Europe.

For the Film ‘The Song of Service’ (105 min), directed by Mr. Alvaro Forque, along
with musician Eduardo Laguillo (Spain, 1998).


Recent events as a guest musician in New York:
Jeff Becker & the Peace of Heart choir, performing a premier of one of my own compositions for Voice, Tabla, Choir and Brass section called Sargam Rupak/Jalim  along with a brass quartet, at Makor, NYC.
Vimala, Neo classical singer, presenting her  CD ‘One Life’ at the Slipper Room, NYC.
Damo Suzuki Network – Experimental Jazz, at the Knitting Factory, NYC.
J’wish dub, presenting a jewish/ Indian/ meditative cross cultural music, at the Orensanz foundation, NYC.
Captain Hilarious,  Folk/Rock/fusion band, at SIR studios, NYC.


As a solo artist:

Presenting the new CD ‘Nama’, along with guest musicians, in California.
With Ethnic Fusion Sound, concerts as a Singer/ Percussionist/ Songwriter, presenting material from the CD ‘Ethnic Fusion Sound – Collection #1’, along with guest musicians at CBGB lounge, and other clubs & places around NYC.
World, In Peace, a music – dance/movement performance based on the experience of the 9/11 tragedy, along with Dancer Choreographer Lara Colorado, at the Anthroposophical Society, NYC.

Orchestral
Concerts in Madrid, Spain:  Tour with a 20 members orchestra within the ‘New Composers Festival’ at the National Auditorium and other regional theaters around Spain – 1998/2000.

Concerts in Buenos Aires, Argentina:  with the Superior School of Percussion directed by Master Antonio Yepes in the series of ‘Concerts for Children’ and ‘Concerts at Noon’ organized by the City of Buenos Aires County – 1994/95

Some workshops and Master Classes

Other related skills and knowledge:

Feel free to contact us for any question you have.